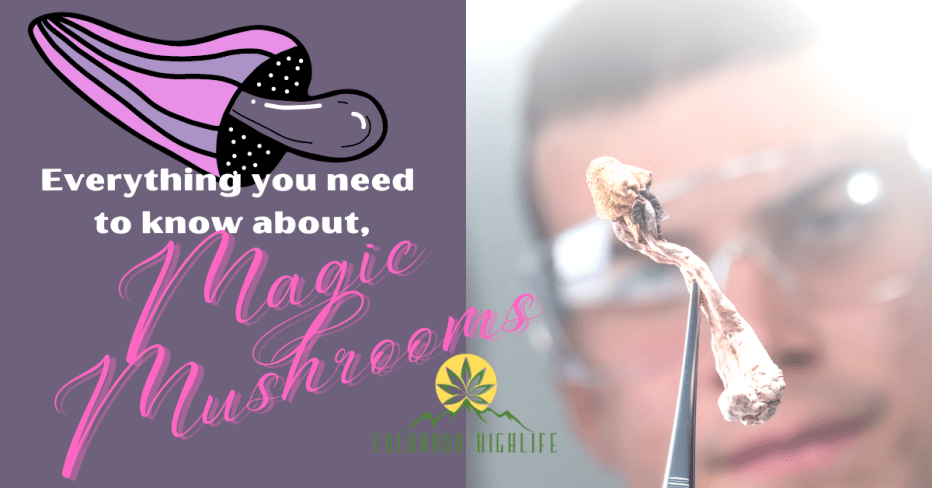 So in Colorado a new law that has recently passed lets people grow and share magic mushrooms. So we thought it might be a good thing to cover them here. We already have an article explaining the good and the bad of magic mushrooms. Now we will go over them in a bit more detail.

What are Magic Mushrooms?

Psilocybin is a hallucinogenic chemical in specific mushrooms that originate from South America, Europe, Mexico, and the United States. Mushrooms that contain psilocybin chemicals are known as magic mushrooms or shrooms. People have been using this substance since ancient times to get the feeling of euphoria and relieve a number of medical conditions. Magic mushrooms have a myriad of street names, such as:

Owing to its hallucinating and euphoric effects, people compare it with cannabis and its derivatives, CBD (cannabidiol) and THC (tetrahydrocannabinol). Cannabis is known for its high-producing effects and therapeutic benefits, which are usually linked with CBD products. Now, coming back to magic mushrooms, these substances have been used for decades for medicinal, recreational, and spiritual purposes. That being said, the federal government hasn’t approved its medical use.

In this blog post, we will be discussing everything you need to know about magic mushrooms, how they influence your body, what research says about them, and their use. Read on.

How Do Magic Mushrooms Influence the Body?

Psilocybin works with the human body by activating serotonin receptors, mostly in the prefrontal cortex of the brain. This part of the brain is responsible for regulating mood, perception, cognition, pain, and pleasure. When a person consumes magic mushrooms, they feel euphoria and perceive objects a bit differently, and go into a completely tranquil state. Now, there are different factors that affect how psilocybin will affect your body. For instance, the number of shrooms, the body’s tolerance level, age, weight, and metabolism are a few of the factors that play an imperative role here.

People who are dealing with everyday stress, anxiety, and depression seek magic mushrooms to get quick and effective results. As soon as the user takes shrooms, the effects occur within 30 minutes and last for about 4-6 hours. Some people even report that they feel the effects for several days.

The effects you’ll feel after consuming magic mushrooms also depend on the potency of the shroom, which further depends on factors such as :

Hence, a nice experience with psilocybin also depends on the quality of the product.

How to Consume Shrooms?

Now the question is: how to consume magic mushrooms? Or, which is the best way for consumption? There are different strains of shrooms available; some contain higher amounts of psilocybin and hence, are meant for users who regularly consume the substance. On the other hand, there are some with lower content of psilocybin, which makes it a convenient choice for beginners. Thus, no matter at what stage you’re in, make sure to choose your strains carefully. For this, try using high-quality shrooms from a magic mushroom dispensary that offers a wide variety of shrooms and also provides online delivery services. Considering the post-pandemic time, users now prefer shopping from the comfort of their homes.

Speaking of different ways one can consume the substance, people take it as a brewed tea or prepare it with an edible item to get rid of its bitter taste. You would also find shrooms in capsule form, which are made by crushing dried mushrooms into a powder form.

What are the Benefits of Magic Mushrooms?

While the majority of the users take psilocybin to get the peaceful high, magic mushrooms can be therapeutic in nature as they are used for the management of a few medical conditions.

How Long Do Shrooms Stay In Your System?

If you take an average quantity of magic mushrooms, the short-term effects will typically last for 6 to 12 hours. That said, there are people who might feel long-term changes in personality and flashbacks long after consuming mushrooms. The half-life of shrooms is one to two hours, and it nearly takes five to six half-lives for psilocybin to completely vanish from your body. Did you know psilocybin can even be found in hair follicles for up to 90 days?

What You Need to Know About Psilocybin Tolerance?

Just like any other substance, if you consume magic mushrooms in excessive amounts and for a longer period of time, you will build more tolerance. After a while, your body will get used to it, and you might need a higher dose to achieve the same level of effects. However, be sure to be careful while developing tolerance since overuse of shrooms can lead to some side effects. These effects could include agitation, frustration, vomiting, and muscle weakness. Hence, if you are a beginner, make sure to start with a low dosage and have someone with you to guide you throughout the time. Besides, the key with magic mushrooms is microdosing which yields the best results.

People across different regions of the world use psilocybin both for recreational and medicinal purposes. While users claim it to be an effective remedy for a myriad of medical conditions, such as anxiety and depression, the scientific community still believes that a lot of research is required.  Detailed studies are needed to study the long-term effects of mushrooms. There are multiple ongoing studies on psilocybin to explore its new and different effects on humans. Thus, all users are advised to be careful with their psilocybin consumption, as it can make you a little overwhelmed, especially if you’re a beginner. Slowly and steadily, as you get along with the substance, gradually increase the dosage to get the desired effects.